There are a lot of subjects and notions that I look forward to debating once presented to me.

And then there are some that I just leave alone and take a backseat role to further observe its progression (or regression in some cases). And then there’s Lady Gaga.

No shade from me. I think what she has done in the amount of time that she has done it (especially in the condition that the music industry is currently in) is phenomenal, but not original. Kinda like an upgrade. The 2.0 version.

While traveling the WordPress.com homepage I found this article by eastofwabansia and honestly, I couldn’t have written it any better myself. Peep:

Gaga is the American Apparel Madonna. The stuff has been around for a while, she just made it cool again.

14 million views and counting, Laday Gaga’s video for “Telephone” has already achieved a supernatural level of celebrity and is a qualified internet fame. The video, which draws upon a Quentin Tarantino (and therefore 70s exploitation film) aesthetic by way of font, iconography (please note Pussy Wagon/Type Face), and tone, plays out like a Vogue shoot reimagining Thelma and Louise. The video clocks in at over 9 minutes, and I must say the radiant costuming, sexually incendiary scenes, gritty violence, and use of metaphor makes the time fly by. But while watching, one of the many thoughts to cross my mind was: does everyone know we have seen this before?

The argument that Lady Gaga is the new “Madonna” is trite, and anyone with a tiny amount of cultural memory can unpack the connections.  Gaga and Madonna are both blonde provocateurs who manipulate gender roles, play with queer imagery and S&M, and create lively and visually stunning videos/personas all while cultivating massive normative appeal and acceptance because of the pop-yummy musical backdrop.

But what I am left wondering is why we are so gaga for Gaga when we have seen this whole song and dance before? While screening the video, my roommate wondered, “isn’t Madonna timeless? How can you garner so much attention when you are so clearly modeling yourself after such a superstar?”

I wonder the same.  How has Gaga achieved so much praise, when she is clearly just performing some Madonna Karaoke on Halloween? 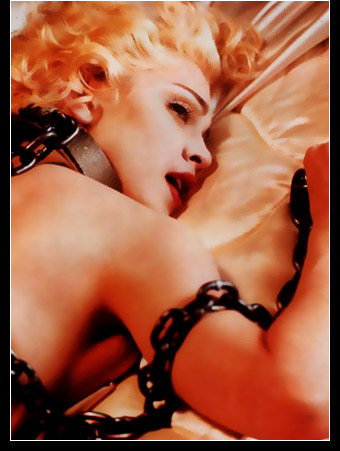 I do think Gaga deserves a hefty amount of praise. She has some fantastic songs, and I have to applaud any artist who challenges the conventional “girl goes chasing after guy” narrative with a “girl goes chasing after guy” storyline. Gaga is fantastic because she, like Madonna, confronts the simple, one dimensional, status-quo portrait of the attractive female on an ideological and aesthetica level.

However, unlike Madonna, Gaga’s performance is not all that original or innovative. Perhaps it is impossible for us to sustain a level of excitement for an artists across decades. Perhaps we always need the “new,” even if that new isn’t all that new.

When I really start to think about the Gaga phenomenon in the context of today, it all makes a bit more sense. We at present are obsessed with reimagining the past and passing it off as a unique and new.  Acid wash denim anyone? It would seem Gaga is the musical iteration of such a case.  We long for the past, but cannot seem to feel comfortable, or maybe lack the historical knowledge, enough to celebrate the originators so we recreate the past with a slightly different fabric.